VICTORIA GEARS UP FOR ROCKASTRA 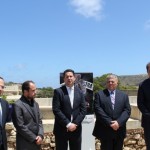 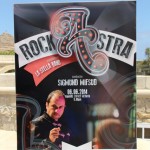 The La Stella Philharmonic Society has proudly announced the second edition of RockAstra, an open-air concert featuring the La Stella Band under the direction of Mro Sigmund Mifsud, that will take place in Republic Street, Victoria, on Friday 6 June 2014.  Information on the preparations and line-up of the concert were given during a press conference held on Friday 30 May at Il-Maxtura Complex in Gozo, in the presence of Dr Edward Zammit Lewis, Minister for Tourism, Dr Anton Refalo, Minister for Gozo, Dr Samuel Azzopardi, Mayor of Victoria, Michael Formosa, Administrative Secretary of the La Stella Philharmonic Society and Mro Sigmund Mifsud, artistic and musical director of RockAstra.

The press conference was addressed by Mr Michael Formosa, Administrative Secretary of the La Stella Philharmonic Society, who said that following the major success achieved last year, this year’s edition of RockAstra promises to offer another magical night of live rock music, lights and special effects.  He stated that RockAstra was yet another breakthrough for the La Stella Band which has triggered a wave of enthusiasm within the Band, and also commended the efforts of Mro Sigmund Mifsud.

Mro Mifsud, who was appointed Assistant Musical Director of the La Stella Band in November 2013, referred to the rewarding experience of working with the La Stella Band.  He explained that the forthcoming edition of RockAstra will accentuate the versatile profile and potential of the La Stella Band and will provide a platform for local talent. Local artistes Aldo Busuttil, Francesca Borg, Anna Azzopardi, Louisana Bartolo, Tiziana Calleja and Michela Pace will feature.  Classic and popular tracks from the repertoire of John Lennon, Freddie Mercury, Zucchero, Deep Purple, John Fogerty and Leonard Cohen, amongst others, will be highlights of the concert.

The Minister for Tourism, Dr Edward Zammit Lewis, described this activity as another occasion which promotes musical culture in Malta and Gozo.  Cultural initiatives like these are important to increase internal tourism between the islands.  Dr Zammit Lewis noted that the fact that RockAstra falls on the eve of a public holiday should further encourage the Maltese public in planning a visit to Gozo for this concert.  He continued that this initiative is already proving to be a well-established major event in the cultural calendar of the Maltese islands, and congratulated the La Stella Band to continue to build on the success achieved so far in this cultural venture.

The Minister for Gozo, Dr Anton Refalo, remarked that these kind of cultural initiatives help in confirming the island as a destination of excellence, and enrich the cultural calendar of Gozo.  Dr Refalo recognised the potential of the La Stella Band and renewed the Ministry’s promise of offering its full support for this large-scale musical event.

Dr Samuel Azzopardi, Mayor of Victoria, noted with gratitude the efforts of the La Stella Philharmonic Society which through the collaboration of the Local Council will be organising a large-scale concert which will boost in no uncertain way the musical profile of city of Victoria.

This year’s edition is being organised in collaboration with the Victoria Local Council, the Ministry for Gozo, the Ministry for Tourism, the Malta Tourism Authority and the Ministry for Justice, Local Government and Culture and is supported by General Soft Drinks Co. Ltd, Citadel Insurance plc, Arkadia, Ivory Suite – Maxtura and Banif Bank.

Entrance for the concert is free of charge and seating is on a first come first served basis.