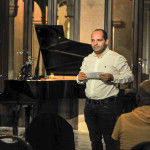 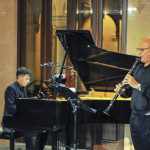 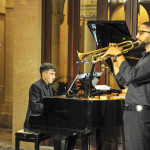 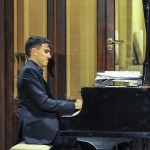 Wolfgang Amadeus Mozart ((1756-1791) Concerto Rondo in E-flat Major
(Arr. by Walter Beeler)
Trumpet- Robert Buttigieg, Piano – Francis Camilleri
The Rondo in E flat major, K.371 is dated 21st March, 1781. It appears to have been composed as a last movement of what would have been Mozart’s first horn concerto. Subsequently, Mozart composed four complete horn concertos. It seems that the horn was his most favorite brass instrument. This composition may have been quite striking at that time, having as a final note a low E flat. It is scored for strings and pairs of oboes and horns. This arrangement for solo trumpet is by Walter Beeler.

CLAUDE DEBUSSY (1862-1918) – Premiere Rhapsodie
Clarinet – Mario Galea, Piano – Francis Camilleri
Debussy was one of the first composers of the French impressionist movement which was active from the late 19th and early 20th century. In art, impressionism was a term created to describe the style of the late 19th century French paintings where the emphasis was on the overall light impression instead of clarity and detail. At the same time, the music of Debussy demonstrated the amazingly beautiful musical palette of colors that personify impressionism. Harmonic innovations of the impressionist composers included the use of wholetone scales, pentatonic scales, various non-traditional modulations and chromaticism.
Première Rhapsodie was composed for the 1910 clarinet competition held at the Conservatoire National Superieur de Musique de Paris. It was dedicated to Prospère Mimart, the professor of clarinet at the conservatory from 1904 to 1918. The composition’s configuration was set by the Conservatory’s guidelines. This was to include a slow lyric section to display the performer’s quality of tone and a brighter section to showcase his dexterity. Debussy interchanges between the two contrasting moods throughout the piece.
The Concours took place on July 14, 1910 and Debussy was a member of the jury, hearing eleven clarinet students. Six months later, the Rhapsodie received its official premiere performance, by its dedicatee Prosper Mimart on the 16th January 1911 at the Salle Gaveau in Paris. Captivated by the performance, Debussy immediately decided to orchestrate the work. The Rhapsodie is a vigorous test of the clarinetist’s facility to project a lyrical singing tone and exhibit command of technical challenges ranging from rapid chromatic runs to chains of trills and swift changes of articulation.

Rita Deefort/Andre Waignein (1942-2015) – Spanish Trumpet
Trumpet- Robert Buttigieg, Piano – Francis Camilleri
Rita Defoort was the wife of Belgian composer André Waignein (1942-2015). Waignein wrote many works under the pseudonym of his deceased wife Rita Defoort. He was a famous trumpeter and was also known for his symphonies and numerous works for concert band. Waignein had amassed around six hundred compositions at the time of his death. Spanish trumpet is an air reminiscent of the Latin American music commonly heard in Mexico. It was originally written for concert band accompaniment. The music has a very warm melody with an immensely effective cadenza in the middle. The composition has a ternary structure.

GIOACHINO ROSSINI (1792-1868) – Introduction, theme and variations
Clarinet – Mario Galea, Piano – Francis Camilleri
Gioachino Rossini (1792-1868) was an Italian composer who is primarily known for his operas. He also wrote many songs, chamber music, piano pieces, and sacred music. In 1907, at the age of fifteen Rossini was admitted to the Liceo Communale in Bologna to study harmony and counterpoint with Padre Mattei. During the next three years he composed various instrumental works, including two sets of variations for clarinet and orchestra. The second of these dating from 1910 is the one being performed today. The work was originally written for clarinet in C, which at that time, was the most popular amongst clarinet players.
The music is very operatic in style. It begins with a lyrical introduction Andante in the key of E flat, which is embellished with ample fioriture, very common in operas of the belcanto period. This is followed by a jaunty theme Allegretto in the key of B flat. In the following five variations, the clarinet explores all of its registers with a brilliant display of scales and arpeggios.
The music slows only in the fourth variation, Largo in Bb minor, which takes us to the minor key and briefly offers the clarinet an opportunity to deeply touch the listener with a somber and languish melody. The fifth variation brings the piece to a lively ending with an absolute display of technical mastery. Surely, no other wind instrument could so effectively imitate the agility of coloratura writing which we associate with the human voice. Still less, could it capture its bel canto beauty and delicacy, or express itself with the exceptional skills of an opera singer as impressively as the clarinet does here.

Ludwig van Beethoven (1770-1827) – Sonata op 27 no 2 in C# minor
‘Sonata quasi una fantasia’ Adagio sostenuto; Allegretto; Presto
Piano – Francis Camilleri
Beethoven billed each of the two works published under Op. 27 as a ‘sonata quasi una fantasia’, presumably a hint that he was trying to meld the formal conventions of the eighteenth century sonata with a more Romantic style. Many musicians consider the first of this pair, the Piano Sonata No. 13 in E flat major, to be the superior work, but the Piano Sonata No. 14 in C sharp minor is by far more popular; in fact, it is one of Beethoven’s most beloved works, and its first movement takes a place among the most widely and instantly recognizable music the composer ever penned. The familiar appellation ‘Moonlight’ is not the composer’s own, but the invention of German music critic Ludwig Rellstab, who compared the first movement’s rippling texture to the moonlight shimmering on Lake Lucerne. However, this sonata and the first movement in particular have nothing to do with any moonlight. Rather, it is more of a funeral march, taken from Mozart’s Don Giovanni with its relentless triplet figure over which the lamenting melody unfolds.
The first movement is marked Adagio sostenuto, a virtual invitation to draw out the music to such an extent that the slight, probing melody becomes difficult to follow, leaving listeners to be hypnotized by the undulating arpeggios that serve as an introduction and then (theoretically) receding into accompaniment. The right tempo is key to the effectiveness of this movement. Played too fast, the music sounds mechanical; perhaps more frequently, though, it is played with funereal slowness. A tempo between these extremes brings out the music’s yearning character, particularly in the passage in which slow sighs rise and fall in the treble, with a weary echo in the bass.
The first movement is not really in sonata form; it essentially lays out thematic material — a brooding opening, the ‘sighing’ passage, and a regretful little hymn — with some poignant modulations along the way, then repeats everything. The second movement, Allegretto, is a short, delicate interlude with a syncopated tune in the treble that is interrupted by slightly darker ruminations in the bass during the central section. The Presto transforms the first movement’s contemplative arpeggios into a frantic, obsessive figure whose upward ripple that even infects the melody, investing the finale with a character that looks forward to the ‘Waldstein’ Sonata. This movement, rather than the first, is the one that assumes a sonata allegro form, though Beethoven breaks with tradition by making all the thematic units equally agitated. If the Adagio was a reflection of private, inner thought, the Presto is high public drama, an unexpected and effective contrast to the sonata’s intimate beginning.

George Gershwin (1898-1937) -Someone To Watch Over Me
(Arr. Joseph Turrin)
Trumpet- Robert Buttigieg, Piano – Francis Camilleri
Someone to watch over me is a song composted by George Gershwin in 1926. It was originally composed for the musical Oh, Kay! dedicated to Philip Smith, principal trumpet player of the New York Philharmonic orchestra. The musical ran for more than 200 performances in New York before the equivalent number of performances in London in 1927. Initially, it was composted as a fast and jazzy, scherzo, but was in the 1930s recorded in a much slower form. It is a slow, profound ballad which touches the heart of every listener. The song was made famous by later recordings by Frank Sinatra, Barbara Streisand and many others.

CARL MARIA VON WEBER (1786-1826) – Clarinet concerto no.2 in E flat major Op.74 3rd movement
Clarinet – Mario Galea, Piano – Francis Camilleri
Weber was one of the earliest composers of the Romantic period. Although active in the late classical period, his music is essentially romantic in style. During his time he befriended the Munich based clarinet virtuoso Heinrich Barmann (1784-1847). Barmann played on the relatively new ten-keyed boxwood clarinet. At that time great improvements in clarinet manufacturing were quickly taking place. Barmann caught the attention of Weber while the latter stopped in Munich for a short time during a great Eastern European concert tour. Barmann’s tone quality immediately enticed Weber to compose a clarinet concertino for him.
Weber was so impressed by Barmann’s technique and flexibility that he was inspired to write two full concertos for the instrument. The first performance of the Clarinet concerto no. 2 in E flat major Op.74 took place in Munich, on the 25th November 1811. It was received “with frantic applause,” as Weber noted in his diary. This enthusiastic reception was “due to Barmann’s divine playing”.
The third movement from the concerto in E flat no.2 Op.74 mentioned above, is in the Rondo form. The composer set it as a Pollaca with the characteristic rhythm of the Polonaise, a Polish dance. This movement makes remarkable demands on the soloist. The clarinetist opens the movement with a tune of considerable rhythmic ingenuity. The principal theme is very effective, mostly due its persistent use of syncopation. The clarinet part is occupied with solo episodes of glittering virtuosity. The music ends with an exhilarating coda, the soloist cuts loose with some breath-taking runs which might be enough to burn the fingers of most clarinetists!

Joseph Guy-Ropartz (1964-1955) – Andante et Allegro
Trumpet- Robert Buttigieg, Piano – Francis Camilleri
Joseph Guy-Ropartz was a French composer and conductor. Having studied with Théodore Dubois and Jules Massenet at the Paris Conservatory, Guy-Ropartz went on to a successful career as a composer, conductor and educator. His writing is prolific having composed symphonies, string sonatas and quartets as well as a number of stage and choral works. His musical style was loosely inclined towards Claude Debussy and César Franck.